Overnight interest rates will guide whether the trader will ultimately pay to hold the position or earn interest. Typically, these interbank rates will track a central bank’s target quite closely, however sharp changes in the supply or demand for a specific currency can shift interbank borrowing rates away from the central bank rates.

It is possible however that both rollover for buying and selling the same pair are negative. As both Banks and GoDo charge a small spread on interest paid or earned.

Any client holding an open position at the end of the trading day (5pm EST) will be credited or debited rollover.

Rollover can add a significant extra cost or profit to your trade. Upcoming Rollover can be viewed in the MT4 terminal each symbol right click specification.

Where is rollover shown?

liquidity providers. Every effort is made to display rollover rates one day before they are posted to your account.
However, during times of extreme market volatility, rates may change intraday. 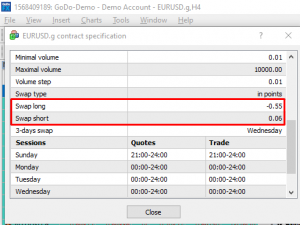 To view today’s rates, select the particular symbol in the MT4 Market watch window, right click and select Specification to view the swap rates as shown above.
The rollover rates for all the currency pairs are in the Swap long and Swap Short rows. Swap long will show you how much rollover you will pay or earn if you sell the currency pair (and have the position open at 5 p.m.). If the number shown is negative, you pay that amount. If the number is positive, you earn that amount.
The amount shown is denominated in the currency used by the account, which means that if the trading account is in U.S. dollars, the rollover amount is shown in U.S. dollars.

Rollover is displayed in the platform for 1 contract of a CFD and for a 1k lot of a currency pair.

Rollover is the interest paid or earned for holding a position overnight, any client holding an open position at the end of the trading day (5pm EST) will be credited or debited rollover.

Most liquidity providers are closed on Saturdays and Sundays, so there is no rollover on these days, but most liquidity providers still apply interest for those two days. To account for that, the Forex market books three days of rollover on Wednesdays, which makes a typical Wednesday rollover three times the amount on Tuesday. Additionally, there is no rollover on holidays, but an extra days’ worth of rollover two business days before the holiday.

Please see below table that indicates how many days of rollover will be applied to open
positions at 5pm EST on each trading day.

Do rollover rates and policies vary from broker to broker?
Yes. In addition to our policy of transparency in reporting rollover, due to the average notional trading volume that GoDo generates to the liquidity providers it deals with, GoDo is able to pass to its clients’ attractive rollover rates on both sides of every currency pair. Liquidity providers include global banks, financial institutions, prime brokers and other market makers
Can I place trades during the weekend?

Please note that orders placed prior may be filled until 5:00 p.m. ET and that traders placing trades between 4:55 p.m. and 5:00 p.m. ET may be unable to cancel orders pending execution. In the event that a Market GTC Order is submitted right at market close, the possibility exists that it may not be executed until Sunday at market open. Please use caution
when trading around Friday’s market close and factor all the information described above into any trading decision.

Are trades held over the weekend affected by trade rollover?

However, spot Forex transactions technically have a 2-day settlement period. Therefore, the weekend rollover is accounted for 2 days later, on Wednesday.

Also, if there is ever a national holiday, where banks in that country are closed, there is generally 0 rollover applied to that countries currency pairs. For example, if there were a US holiday on a Monday, there would likely be no rollover on that Monday, and twice normal rollover on Tuesday.

Why do I see rollover on my account?
Unless requested, accounts are set up to pay or earn rollover on open trades held past 5 PM EST Daily
When is rollover booked?

5 p.m. in New York is considered the beginning and end of the Forex trading day.

To account for that, the Forex market books three days of rollover on Wednesdays, which makes a typical Wednesday rollover three times the amount on Tuesday. There is no rollover on holidays, but an extra days worth of rollover two business days before the holiday.

Typically, holiday rollover happens if any of the currencies traded has a major holiday. Therefore, Independence Day in the USA, July 4, closes American liquidity providers, and an extra day of rollover is added at 5 p.m. on July 1 for all U.S. dollar pairs.

This website uses cookies to improve your experience while you navigate through the website. Out of these, the cookies that are categorized as necessary are stored on your browser as they are essential for the working of basic functionalities of the website. We also use third-party cookies that help us analyze and understand how you use this website. These cookies will be stored in your browser only with your consent. You also have the option to opt-out of these cookies. But opting out of some of these cookies may affect your browsing experience.
Necessary Always Enabled
Necessary cookies are absolutely essential for the website to function properly. These cookies ensure basic functionalities and security features of the website, anonymously.
Functional
Functional cookies help to perform certain functionalities like sharing the content of the website on social media platforms, collect feedbacks, and other third-party features.
Performance
Performance cookies are used to understand and analyze the key performance indexes of the website which helps in delivering a better user experience for the visitors.
Analytics
Analytical cookies are used to understand how visitors interact with the website. These cookies help provide information on metrics the number of visitors, bounce rate, traffic source, etc.
Advertisement
Advertisement cookies are used to provide visitors with relevant ads and marketing campaigns. These cookies track visitors across websites and collect information to provide customized ads.
Others
Other uncategorized cookies are those that are being analyzed and have not been classified into a category as yet.
SAVE & ACCEPT